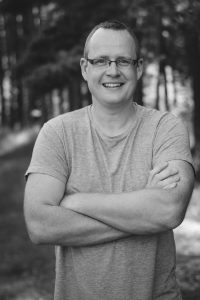 Tim has been married to his wife Rachel since 2001 and they have two daughters and two cats. He lives in Tallinn, Estonia, having moved there with his family in 2012 from St Petersburg, Russia, which they moved to in 2008. He is originally from Kent in England and lived for 8 years in Cheshire before moving abroad.

In March 2019 Tim became an International Bestselling Author with a #1 in the thriller chart in multiple countries.

He has written 26 novels and 3 screenplays, most of which are already published or in the process of being published. He's still waiting for one of his films to be made… You can check out his books here.

In 2021, Tim launched his first all-age series in a new genre, under the pen-name T. P. Heath, the first of an eight-book series dealing with time travel and the life of the main character, Twiggy Rattlesnake.