Progress at times was slow today – this is my fourth novel, so I'm getting better at understanding what it takes, and getting through these moments.  Though this is a sequel, there are a lot of new characters to get to know.  That takes time, I'm learning who they are as I write, so until they act more on the page, the story flows out of me a little slower as I'm trying to express who they are by the actions and statements they make.  If that makes sense.

I guess calling the novel a sequel is a little confusing, when I'm saying the characters are new.  The book follows events that happen in The Last Prophet, but I'm really developing characters (or adding them!) that might have only been mentioned in passing, or were nameless, in the first novel.  It's important that The Shadow Man stands alone.  I'm going to get people who first discover me as a writer through this book so I don't want them to have to read a previous book to be able to understand this one.

So, I'm making progress.  I'm on schedule.  Hopefully next week I can really motor.  I had just two writing days this week – planning on three next week, so we'll see. 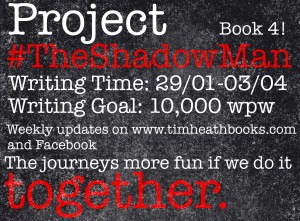 The start of writing for The Shadow Man